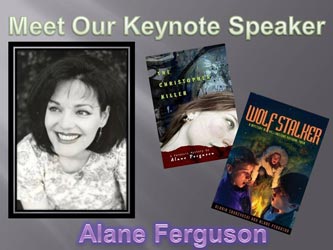 Alane Ferguson was born in Cumberland, Maryland, in 1957. She attended the University of Utah and Westminster College where she studied journalism. Later, Alane became interested in writing for children, mostly, she says, to follow the example of her mother, successful author Gloria Skurzynski. Their novel, Wolf Stalker, was the END_OF_DOCUMENT_TOKEN_TO_BE_REPLACED