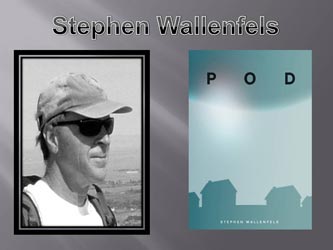 Stephen Wallenfels served as a contributing editor to Club Business International magazine, a leading fitness trade journal, since 1989. During that time he has written over 50 feature articles, columns and interviews with leaders in the health and fitness industry. While Stephen enjoys journalistic writing, his first love is fiction. He has published short stories for adults and kids, and his first novel, POD (YA scifi), was published in April, 2010, by Namelos, and subsequently picked up by Putnam/Penguin for North American trade paperback publication in summer 2011.  Stephen is currently working hard and fast on the sequel, POD II.

2011 Cavalcade workshop: The 3 Cs of Writing: Character, Conflict and Change

This workshop covers three of the key elements of an effective story, how they are related, and how they keep readers turning the page.

As alien spacecraft fill the sky and zap up any human being who dares to go outside, fifteen-year-old Josh and 12-year-old Megs, living in different cities, describe what could be their last days on Earth.