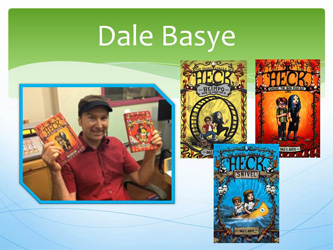 Dale E. Basye (a subsidiary of his parents) has written stories, screenplays, essays, reviews, and outright lies for many publications and organizations. He was a film critic for Willamette Week, winning several national journalism awards, and published an arts and entertainment newspaper called Tonic. His first book, Heck: Where the END_OF_DOCUMENT_TOKEN_TO_BE_REPLACED