Z Brewer is the NYT bestselling author of The Chronicles of Vladimir Tod series, as well as The Slayer Chronicles series, Soulbound, The Cemetery Boys, The Blood Between Us, Madness, and more short stories than they can recall.

When not making readers cry because they killed off a character they loved (with glee, because Z’s evil like that), Z is making plans for world domination while sitting on their coffin couch. Z likes to talk about bullying and mental health. Plus, they have awesome hair. I mean…just look at them.

Z lives in Missouri with a husband person, two children people, and four furry overlords that some people refer to as “cats”. They also like Starbucks. A LOT.

For thirteen years, Vlad has kept secret that he is half-vampire, but when his missing teacher is replaced
by a sinister substitute, he learns that there is more to being a vampire, and to his parents' deaths, than
he could have guessed. (gr 6-8)

The summer before ninth grade, when Joss sets off to meet his uncle and hunt down the beast that0
murdered his younger sister three years earlier, he learns he is destined to join the Slayer Society. (gr 6-8) 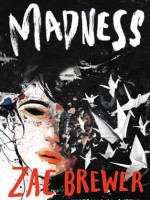 New York Times bestselling author Zac Brewer delivers his most honest and gripping novel yet, about a
girl who believes she’s beyond saving—until she realizes the only person who can save her is herself. (gr 9+) 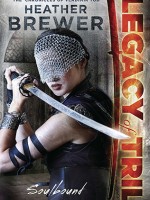 Kaya, a 17-yr-old Healer who must attend Shadow Academy, where fighting by Healers is outlawed.
When she asks two men to train her, their choice changes their lives forever. (gr 7+)

The Blood Between Us

Family secrets turn deadly in this edgy page-turner about the insidious limits of labels and the ties that
bind just a little too tightly, from the New York Times bestselling author of the Chronicles of Vladimir
Tod. (gr 8+)

Stephen moves to a new town and quickly falls in with punk girl Cara and her charismatic twin brother,
Devon. But the town has a dark secret, and the twins are caught in the middle of it. (gr 9+)

The Ghost of Ben Hargrove

In this standalone short story from New York Times bestselling author Heather Brewer, a boy wakes up
in a cell with no recollection of how he got there—and no idea how he is going to escape. (gr 9+)