Tiffany D. Jackson is the critically acclaimed author of YA novels including the NAACP Image Award-nominated ALLEGEDLY and MONDAY’S NOT COMING, a Walter Dean Myers Honored Book and Coretta Scott King New Talent Award winner. She received her bachelor of arts in film from Howard University, her master of arts in media studies from the New School, and has over a decade in TV/Film experience. The Brooklyn native is a lover of naps, cookie dough, and beaches, currently residing in the borough she loves, most likely multitasking. Her forthcoming novel, LET ME HEAR A RHYME (HarperCollins/Katherine Tegen Books) releases May 21st, 2019. 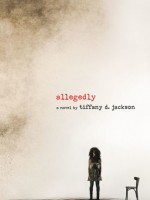 Mary B. Addison killed a baby. Allegedly. She didn’t say much in that first interview with detectives, and the media filled in the only blanks that mattered: a white baby had died while under the care of a churchgoing black woman and her nineyear-old daughter. The public convicted Mary and the jury made it official. But did she do it? There wasn’t a point to setting the record straight before, but now she’s got Ted— and their unborn child—to think about. When the state threatens to take her baby, Mary’s fate now lies in the hands of the one person she distrusts the most: her Momma. No one knows the real Momma. But does anyone know the real Mary? (grades 9+)

Let Me Hear a Rhyme

Brooklyn, 1998. Biggie Smalls was right: Things done changed. But that doesn’t mean that Quadir and Jarrell are cool letting their best friend Steph’s music lie forgotten under his bed after he’s murdered—not when his rhymes could turn any Bed Stuy corner into a party. With the help of Steph’s younger sister Jasmine, they come up with a plan to promote Steph’s music under a new rap name: the Architect. Soon, everyone wants a piece of him. When his demo catches the attention of a hotheaded music label rep, the trio must prove Steph’s talent from beyond the grave. As the pressure of keeping their secret grows, Quadir, Jarrell, and Jasmine are forced to confront the truth about what happened to Steph. Only, each has something to hide. And with everything riding on Steph’s fame, they need to decide what they stand for or lose all that they’ve worked so hard to hold on to—including each other. (grades 9+)

Monday Charles is missing, and only Claudia seems to notice. Claudia and Monday have always been inseparable—more sisters than friends. So when Monday doesn’t turn up for the first day of school, Claudia’s worried. When she doesn’t show for the second day, or second week, Claudia knows that something is wrong. Monday wouldn’t just leave her to endure tests and bullies alone. Not after last year’s rumors and not with her grades on the line. Now Claudia needs her best—and only—friend more than ever. But Monday’s mother refuses to give Claudia a straight answer, and Monday’s sister April is even less help. As Claudia digs deeper into her friend’s disappearance, she discovers that no one seems to remember the last time they saw Monday. How can a teenage girl just vanish without anyone noticing that she’s gone? (grades 9+)