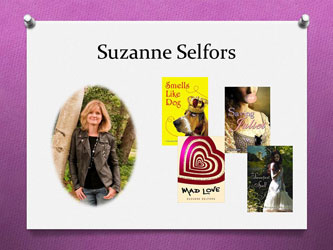 I live on an island. I eat chocolate every single day. The worst job I ever had was chopping up buckets of squid at the Seattle Aquarium. The best job I ever had is the one I have now—writing books. My favorite writer is Roald Dahl. And, YES, that’s a raccoon on my head!

WARNING: Do not put a raccoon on your head unless you are a crazy writer doing research.

Time and time again, authors call upon fairy tales for inspiration. From television shows to movies to best-selling novels, fairy tales continue to be a cherished form of storytelling. In her latest teen novel, The Sweetest Spell, Suzanne Selfors takes the story of the Ugly Duckling and makes it her own. In this workshop, we’ll talk about the common themes in fairy tales, and as a group we’ll have fun making changes to well-known stories, in other words, twisting them. Students will leave with lots of new ideas that will help them begin their own twisted tales.

To contact Suzanne you can e-mail her at mail@suzanneselfors.com 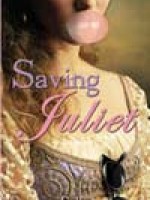 Mimi Wallingford's famous theater family includes a renowned Shakespearean actress. The teen herself has performed since the age of three, and is constantly reminded by her mother that the family's reputation (and the financial stability of the Wallingford Theater) rests upon her shoulders. Mimi, however, would rather major in pre-med at UCLA than study acting. When she is cast as Juliet opposite teen-idol Troy's Romeo, the two are transported to medieval Verona via a magical Shakespeare charm where they meet the real Juliet, an unpretentious, freckle-faced girl of 13. As Mimi begins to see the parallels between the situation with her mother and Juliet's being pressured by Lady Capulet to marry Paris and save the family's fortunes, she resolves to help Juliet escape. Troy and Mimi get involved in a series of misadventures as she attempts to give Romeo and Juliet a happy ending and return to Manhattan. (Gr. 7 & up) 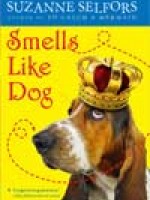 Meet Homer Pudding, an ordinary farm boy who’s got big dreams-to follow in the footsteps of his famous treasure-hunting uncle. But when Uncle Drake mysteriously disappears, Homer inherits two things: a lazy, droopy dog with no sense of smell, and a mystery. Why would his uncle call this clumsy dog his “most treasured possession?” And why did he put a gold coin on the dog’s collar? And who will continue Uncle Drake’s quest-to find the most coveted pirate treasure in the world? Join Homer, his sister Gwendolyn, and Dog on an adventure that will test their wits and courage as they leave their peaceful farm and head into a world where ruthless treasure hunters hide around every corner. Where they discover that Dog has a hidden talent and that treasure might be closer than they ever imagined…(Gr 4-6) 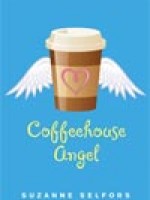 When a random act of kindness involves Katrina with Malcolm, a handsome teenage guardian angel intent on fulfilling her greatest wish, fame and fortune seem like the most obvious requests. But after two botched wishes, Malcolm knows Katrina is hiding something from him. How can she tell him the truth, when her heart’s desire has become Malcolm himself? (Gr 7-12) 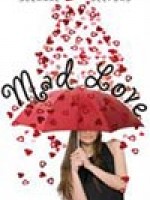 Alice Amorous, the daughter of the bestselling Queen of Romance, has been living an agonizing lie ever since her mother was secretly hospitalized for mental illness. But her next book is well overdue and the Queen can’t write it. Alice needs a story for her mother-and she needs one fast. That’s when she meets Errol, a strange boy who claims to be Cupid and insists that Alice must write the story of his tragic love affair with Psyche. Can Alice do double duty to help Errol and her mother without losing her own sanity? (Gr 8-12) 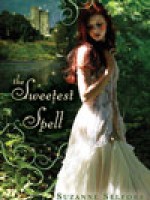 Emmeline Thistle, a dirt-scratcher's daughter, has escaped death twice-first, on the night she was born, and second, on the day her entire village was swept away by flood. Left with nothing and no one, Emmeline discovers her rare and mysterious ability-she can churn milk into chocolate, a delicacy more precious than gold. (Gr 7-12)