Skip to content
POSTPONED!
In the interest of the health and safety of our authors, students, and volunteers during the COVID19 pandemic, we will be postponing
Cavalcade of Authors this year.

Sarah Beth Durst is the award-winning author of numerous fantasy books for kids, teens, and adults, including The Girl Who Could Not Dream, Drink Slay Love, and The Queens of Renthia series. She’s wanted to be a writer since she was ten years old. (Before that, she wanted to be Wonder Woman. She also would have accepted a career as a unicorn princess.) She lives in Stony Brook, New York, with her husband, her children, and her ill-mannered cat.

Some facts about Sarah: 1. She has ridiculously curly hair. 2. She has zero survival skills, despite writing about fighting bloodthirsty nature spirits, flying on lightning dragons and winged lions, and befriending monsters. 3. She’s afraid of skunks and Frisbees. 4. Her muse is chocolate, especially Raisinets.

Sixteen-year-old Kayla was born with the ability to move things with her mind-things like credit cards and buttons on cash registers-and she has become a master shoplifter. She steals to build up enough money for her and her mom to be able to flee if her dad finds them again . . . which would mean grave danger for them both. When she's caught stealing by a boy named Daniel-a boy with the ability to teleport-he needs her help and is willing to blackmail her to get it. Together, they embark on a quest to find and steal an ancient incantation, written on three indestructible stones and hidden millennia ago, all to rescue Daniel's kidnapped mother. But Kayla has no idea that this rescue mission will lead back to her own family-and to betrayals that she may not be able to forgive . . . or survive. (grades 9+)

Pearl is a sixteen-year-old vampire…fond of blood, allergic to sunlight, and mostly evil… until the night a sparkly unicorn stabs her through the heart with his horn. Oops. Her family thinks she was attacked by a vampire hunter (because, obviously, unicorns don’t exist), and they’re shocked she survived. They’re even more shocked when Pearl discovers she can now withstand the sun. But they quickly find a way to make use of her new talent. The Vampire King of New England has chosen Pearl’s family to host his feast. If Pearl enrolls in high school, she can make lots of human friends and lure them to the King’s feast—as the entrées. The only problem? Pearl’s starting to feel the twinges of a conscience. How can she serve up her new friends— especially the cute guy who makes her fangs ache—to be slaughtered? Then again, she’s definitely dead if she lets down her family. What’s a sunlight-loving vamp to do? (grades 9+)

What Lily Carter wants most in the world is to attend Princeton University just like her grandfather. When she finally visits the campus, Grandpa surprises her: She has been selected to take the top-secret Legacy Test. Passing means automatic acceptance to Princeton. Sweet! Lily's test is to find the Ivy Key. But what is she looking for? Where does she start? As she searches, Lily is joined by Tye, a cute college boy with orange and black hair who says he's her guard. That's weird. But things get seriously strange when a gargoyle talks to her. He tells her that there are two Princetons—the ordinary one and a magical one—and the Key opens the gate between them. But there are more secrets that surround Lily. Worse secrets. When Lily enters the magical Princeton, she uncovers old betrayals and new dangers, and a chance at her dream becomes a fight for her life. Soon Lily is caught in a power struggle between two worlds, with her family at its center. In a place where Knights slay monsters, boys are were-tigers, and dragons might be out for blood, Lily will need all of her ingenuity and courage—and a little magic—to unite the worlds and unlock the secrets of her past and her future. (grades 9+)

In Sky Hawkins's family, leading your first heist is a major milestone--even more so than learning to talk, walk, or do long division. It's a chance to gain power and acceptance within your family, and within society. But stealing your first treasure can be complicated, especially when you're a wyvern--a human capable of turning into a dragon. Embarking on a life of crime is never easy, and Sky discovers secrets about her mother, who recently went missing, the real reason her boyfriend broke up with her, and a valuable jewel that could restore her family's wealth and rank in their community. With a handpicked crew by her side, Sky knows she has everything she needs to complete her first heist, and get her boyfriend and mother back in the process. But then she uncovers a dark truth about were-dragon society--a truth more valuable and dangerous than gold or jewels could ever be. (grades 9+)

Journey Across the Hidden Islands

The traditional Emperor’s Journey should be uneventful. But as the princesses Seika and Ji Lin—twin sisters—travel to pay respects to their kingdom’s dragon guardian, unexpected monsters appear and tremors shake the earth. The Hidden Islands are threatened as old rituals fail. With only their strength, ingenuity, and flying lion to rely on, can the sisters find a new way to keep their people safe? (grades 5-8)

Roar and Sparkles Go to School

Roar is worried about his first day at school. He's worried that he'll have to do really hard things, like molt his scales and fly over a volcano. And what if his teacher doesn't like dragons? Big sister Sparkles reassures Roar That school is fun. And when the first day of school arrives, Roar finds his worries melt away. He meets new friends, plays dragon games, listens to fun stories, and finds a way to thank his sister for support. (grades K-3) 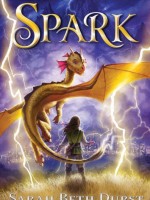 Storm beasts and their guardians create perfect weather every day, and Mina longs for a storm beast of her own. But when the gentle girl bonds with a lightning beast—a creature of fire and chaos—everyone’s certain it’s a mistake. Everyone but Mina and the beast himself, Pixit. Quickly enrolled in lightning school, Mina struggles to master a guardian’s skills, and she discovers that her country's weather comes at a devastating cost—a cost powerful people wish to hide. Mina’s never been the type to speak out, but someone has to tell the truth, and, with Pixit’s help, she resolves to find a way to be heard. (grades 5-8)

The Girl Who Could Not Dream

Sophie loves the hidden shop below her parents' bookstore, where dreams are secretly bought and sold. When the dream shop is robbed and her parents go missing, Sophie must unravel the truth to save them. Together with her best friend—a wisecracking and fanatically loyal monster named Monster—she must decide whom to trust with her family’s carefully guarded secrets. Who will help them, and who will betray them? (grades 3-6)

It was only meant to be a brief detour. But then Lauren finds herself trapped in a town called Lost on the edge of a desert, filled with things abandoned, broken and thrown away. And when she tries to escape, impassible dust storms and something unexplainable lead her back to Lost again and again. The residents she meets there tell her she's going to have to figure out just what she's missing—and what she's running from—before she can leave. So now Lauren's on a new search for a purpose and a destiny. And maybe, just maybe, she'll be found…. (grades 10+)

The Queen of Blood (Queens of Renthia #1)

Everything has a spirit: the willow tree with leaves that kiss the pond, the stream that feeds the river, the wind that exhales fresh snow…

But the spirits that reside within this land want to rid it of all humans. One woman stands between these malevolent spirits and the end of humankind: the queen. She alone has the magical power to prevent the spirits from destroying every man, woman, and child. But queens are still only human, and no matter how strong or good they are, the threat of danger always looms. Because the queen’s position is so precarious, young women are specially chosen to train as her heirs. Daleina, a seemingly quiet academy student, simply wants to right the wrongs that have befallen the land. Meanwhile, the disgraced champion Ven has spent his exile secretly fighting against the growing number of spirit attacks. When Daleina and Ven join forces, they embark on a treacherous quest to find the source of the spirits’ restlessness—a journey that will force them to stand against both enemies and friends to save their land…before it’s bathed in blood. (grades 9+)

Mayka and her stone family were brought to life by the stories etched into their bodies. Now time is eroding these vital marks, and Mayka must find a stonemason to recarve them. But the search is more complex than she had imagined, and Mayka uncovers a scheme endangering all stone creatures. Only someone who casts stories into stone can help—but whom can Mayka trust? Where is the stonemason who will save them? (grades 5-8)