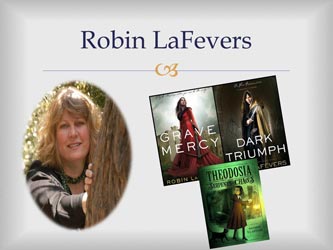 Robin LaFevers was raised on a steady diet of fairy tales, Bulfinch’s mythology, and 19th century poetry. It is not surprising she grew up to be a hopeless romantic. Even though she grew up in the city, she had an unusually wide variety of pets, including dogs, cats, rabbits, a goat, chickens, chipmunks, a baby anteater, and, for a few short weeks, two baby bear cubs, who were VERY wild and untamed. She was also surrounded by a gaggle of brothers who taught her an awful lot about how to get into mischief of all kinds.

Robin has spent a large portion of her life being told she was making up things that weren’t there, which only proves she was destined to write fiction. Though she has never trained as an assassin or joined a convent, she has been scuba diving and parachuting, which are almost as exciting.

Learn more about her middle school novels at http://www.rllafevers.com/Home.html

Plot is not a four letter word. Well, actually it is, but it doesn’t have to feel like one. The best plots grow directly out of the characters themselves—their strengths, their weaknesses, their struggles, and their desires. In this workshop students will learn how to fully explore—and develop—their characters and then use what they learn to create a compelling plot that is organic to those characters.

In the fifteenth-century kingdom of Brittany, Ismae escapes from the brutality of an arranged marriage into the sanctuary of the convent of St. Mortain, where she learns that the god of Death has blessed her with dangerous gifts.

Love and romance, history and magic, vengeance and salvation all converge in this sequel to Grave Mercy that finds Sybella having to face her duty as Death’s assassin in 15th-century France, a reality that forces her return home to the personal hell that she had finally escaped.

Theodosia Throckmorton has her hands full at the Museum of Legends and Antiquities in London. Her father is head curator, but only she sees the black magic and ancient curses that cling to artifacts. Her mother returns from her latest archaeological dig bearing the Heart of Egypt amulet that threatens to destroy the British Empire and start a terrible war.