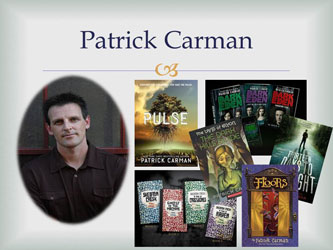 Patrick Carman spoke German before he spoke English. He has since forgotten every word. His mother learned how to speak English by watching soap operas on television. This explains a lot. Patrick grew up loving comic books, monster movies, Star Wars, the Six Million Dollar Man, and Evel Kneivel. He once jumped over his mom’s car with his bike and lived to tell about it. There was no seat on the bike at the time, so it was a big deal. Patrick’s favorite food is frosting out of a can, preferably attached to a salty pretzel. He also likes crossword puzzles, playing basketball, fishing, and watching movies. He is terrible at golf, but that doesn’t stop him from trying.

You can get more information about Patrick Carman at his website: www.patrickcarman.com

Let’s be honest, most of us stare into screens every day of our lives. But television, the Internet, cell phones, and video games are not the enemy if we can adapt and use them to help tell our stories. Patrick will share strategies that will help you blend your stories into the wired world we all live in. He’ll also share how he came to believe that modern readers need 21st century reading choices as much as they need graphic novels and traditional books. Bring questions! You might win a signed book.

“My favorite was Patrick Carman, because he is hilarious and feels like a good friend.” ~CJMS student

The year is 2051 with the help of her mysterious classmate Dylan, Faith discovers that she can move objects with her mind or the “Pulse”.  Even with great talent the mind and the heart can be difficult to control.  If Faith wants to join forces with Dylan and save the world, she’ll have to harness the power of both.

When Will Besting approaches Fort Eden for the first time, he knows something isn’t right.  With more terrifying secrets at every turn, he discovers a hidden fear deep inside himself, a dark mystery a thousand years in the makin, and the unexpected girl of his dreams.  Can he save everyone from the dangers of Fort Eden before it’s too late?

You are indestructible.  These are the words that transfer an astonishing power to Jacob Fielding…and it changes everything.  After all, there’s something addictive about testing the limits of fear, experiencing the thrill of walking through fire, or saving your friend from a beating in front of the whole school.  But with every heroic act, the power grows into the specter of a curse.

Strange things are happening in Skeleton Creek…and Ryan and Sarah are trying to get to the heart of it. But after an eerie accident leaves Ryan housebound and forbidden to see Sarah, their investigation takes two tracks: Ryan records everything in his journal, while Sarah uses her videocam to search things out and then emails the clips for Ryan to see.

Leo Fillmore should know everything there is to know about the Whippet Hotel–he is the janitor’s son, after all. But a whole lot more mystery gets thrown his way when four cryptic boxes are left for him…boxes that lead him to hidden floors, strange puzzles, and an unexpected friend or two.

Alexa Daley is spending another summer in the walled town of Bridewell. This year, she is set on solving the mystery of what lies beyond the walls. Legend says the walls were built to keep out an unnamed evil that lurks in the forests and The Dark Hills. But what exactly is it that the townspeople are so afraid of?  When Alexa discovers a strange and ancient enchantment she is faces a danger that could destroy everything she holds dear.