At an early age I realized that all I wanted in life was to have a job where I didn’t have to wear shoes all the time. I hate shoes. I call them foot prisons. My feet have committed no crimes! Socks, are a different matter entirely. I like to sleep with one on and one off. Don’t judge me. I’m a picky eater. I can’t stand mayonnaise. Mayo is kind of my kryptonite. I like a lot of embarrassing things, too. I watch wrestling sometimes. It’s my secret shame. When you’re a kid everyone loves it but when you’re a full grown man watching other full grown men tossing each other around the ring, well, people tease me. I watch a lot of science fiction shows, sometimes long after they get terrible. I saw every episode of Smallville and that show was bad on the first episode. I like comic books and video games. I love to go to the movies. I can’t watch a movie on a phone or an iPad or even on TV. I want to see it huge with surround sound and candy and popcorn. I like to read, too. I read everything but I’m really a slow reader. I’m kind of a slow writer, too. Maybe I’m not slow. Maybe I’m just lazy. I need to think about that. I like to nap. There is nothing as awesome as a good nap. Nothing! Don’t argue with me! What else? Did I mention the mayo thing? Yeah, that’s some disgusting stuff. 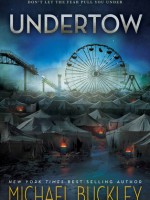 Sixteen-year-old Lyric Walker’s life is forever changed when she witnesses the arrival of 30,000 Alpha, a five-nation race of ocean-dwelling warriors, on her beach in Coney Island. The world’s initial wonder and awe over the Alpha quickly turns ugly and paranoid and violent, and Lyric’s small town transforms into a military zone with humans on one side and Alpha on the other. When Lyric is recruited to help the crown prince, a boy named Fathom, assimilate, she begins to fall for him. But their love is a dangerous one, and there are forces on both sides working to keep them apart. Only, what if the Alpha are not actually the enemy? What if they are in fact humanity’s best chance for survival? Because the real enemy is coming. And it’s more terrifying than anything the world has ever seen. (Ages 12-18) 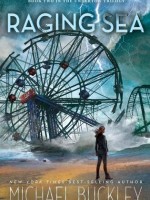 Most of south Brooklyn is in ruins and the nation is terrified. Nearly everyone that Lyric Walker loves is either missing or presumed dead, including the mesmerizing prince Fathom. It’s up to Lyric to unite the Alpha before the second wave of a cataclysmic invasion wipes out mankind for good. (Ages 12-18) 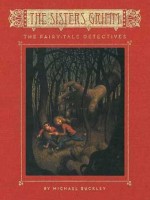 The Fairy-Tale Detectives (The Sisters Grimm #1)

Orphans Sabrina and Daphne Grimm are sent to live with an eccentric grandmother who they have al-ways believed to be dead. (Grades 4-7)

The Unusual Suspects (The Sisters Grimm #2)

The sisters begin school at Ferryport Landing Elementary. Daphne gets Snow White for a teacher, but Sabrina is stuck with nasty Mr. Grumpner and a class of mildly psychotic sixth graders. When Mr. Grumpner is mysteriously murdered, Daphne and Sabrina must discover which Everafter is responsible. But Sabrina’s distrust of all Everafters may get in the way of unraveling the case. (Ages 8-12) 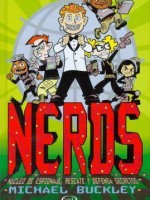 While running a spy network from their elementary school, five unpopular misfits combine their talents
and use cutting-edge gadgetry to fight evil around the world. (Grades 4-7) 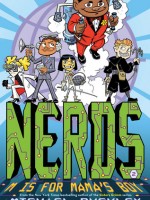 Jackson Jones, a cool kid at Nathan Hale Elementary School, suddenly finds himself ostracized when he's saddled with 14 pounds of highly magnetic orthodonture (“Friends turned their backs when he walked by. Teachers cowered in the lounge, hoping to avoid eye contact”). With no social activities to occupy his time, he starts snooping around school and uncovers its secret: it's the undercover hideout of NERDS, a secret group of underage spies. Even more shocking, the NERDS are the biggest outcasts in the entire school, their allergies and eccentricities turned into assets. (Ages 8-12)

This book invites the reader to join the adoring fans who watch a preschooler perform such daring stunts as eating broccoli, dressing himself, and going to bed without checking for monsters.