Kazu Kibuishi was born in Tokyo and moved to the United States when he was very young. He grew up in southern California, and graduated with a degree in Film Studies from UC/Santa Barbara. Then he moved to Los Angeles to pursue a career in the entertainment industry. Kazu is the author and illustrator of the New York Times-bestselling Amulet graphic novel series for young readers. He is also the creator of Copper, his popular web comic that was published in 2010, and the eight Flight anthologies. He is also the editor of Explorer: The Mystery Boxes and Explorer: The Lost Islands, a new comic anthology series for a younger audience. Most recently, Kazu was honored to be chosen to redesign the Harry Potter book covers to celebrate the 15th anniversary of the first book. The new covers were released in a boxed set in September of 2013. Kazu lives with his wife and two children in Bellevue, Washington, and works full-time as a comics artist.

Go to www.boltcityproductions.com/ for more about Kazu Kibuishi’s books 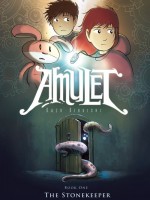 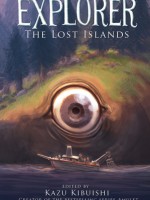 The highly anticipated second volume to the critically acclaimed Explorer series, The Lost Islands is a collection of seven all-new stories written and illustrated by an award-winning roster of comics artists, with each story centered around the theme of hidden places. (Grades 4-8) 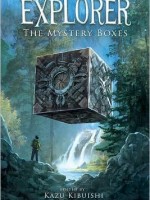 Funny, fantastic, spooky, and suspenseful, each of these unique and beautifully illustrated short graphic works revolves around a central theme: a mysterious box and the marvels--or mayhem--inside. (Grades 4-8) 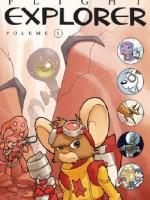 Ten tales by ten authors in this entertaining piece of graphic fiction for younger children. In one story, a child encounters a purple monster on a snowy day; in another story, wishes come true when least expected. (Grades 4-8) 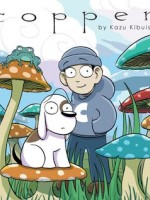 Copper is curious, Fred is fearful. Together, boy and dog are off on a series of adventures through marvelous
worlds, powered by Copper's limitless enthusiasm and imagination.