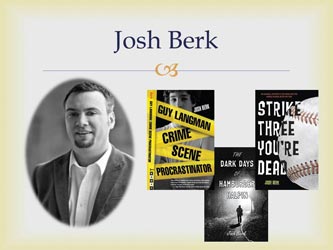 I’m pretty good at juggling and know at least one or two magic tricks. I was voted “best hair” in my high school senior poll. I’m afraid of all scary movies, even ones intended for children.

This fun workshop includes a look at great detectives in fiction as well as lots of useful tips for writers to explore. We consider mood, character, plotting, dialogue, description, and more. Then we brainstorm as a group and come up with chapter one of a brand-new mystery!

Sixteen-year-old Guy Langman, his best friend Anoop, and other members of the school Forensics Club investigate a break-in and possible murder, which could be connected to the mysterious past of Guy’s recently-deceased father.

When Will Halpin transfers from his all-deaf school into a mainstream Pennsylvania high school, he faces discrimination and bullying, but still manages to solve a mystery surrounding the death of a football player in his class.

Dreaming of becoming a sports announcer, die-hard baseball fan Lenny Norbeck wins an amateur announcer contest that awards him the opportunity to broadcast one inning of a Phillies game, but before his turn to announce, things go horribly wrong when a promising young pitcher dies on the mound under suspicious circumstances.