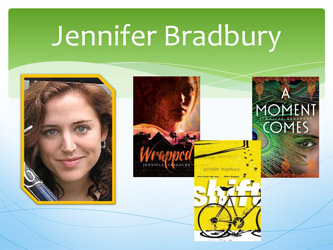 Jen spent eight years teaching high school English, but before that worked at a Boys’ camp where she got lost in the woods with alarming frequency and once was injured and trapped on a blob. She was a one-day Champion on Jeopardy!, but got annihilated the second day by a tiny woman who described herself as “Part-Klingon, Part-Corleone.” Jen is originally from Kentucky and insanely proud of her home state. She’s also a devoted Doctor Who fan, lover of Firefly and lots and lots of books.

Editors are always reminding writers to “Show” instead of “Tell.” In this workshop, we look at what that means, and create a character sketch to practice showing versus telling techniques.

Before India was divided, three teens, each from wildly different backgrounds, cross paths. And then, in one moment, their futures become irrevocably intertwined.

Shift by Jennifer Bradbury (grades 8-12)
Imagine you and your best friend head out West on a cross-country bike trek. Imagine that you get into a fight. The cheap skate wont kick in any cash and you stop riding together. Imagine you reach Seattle, go home alone, and start college. Imagine you think your former best friend does too. Imagine he didn’t, that he was carrying more than $20,000 in cash the whole trip, and that now the FBI is looking for him. Imagine your world shifting…

In early 19th-century England, Agnes Wilkins longs to break free of her repressive mother and become a famed Egyptologist. Because of this she agrees to help Lord Showalter unwrap a real Egyptian mummy, but during the unwrapping, she finds a silver jackal’s head and impulsively hides it in her dress and is unwilling to admit her theft.