​I don’t like the giant ocean crocodile in the new Jurassic Park movie trailer. It’s scary and now I’ll never go in the ocean again. I fear visiting the Pacific Northwest because of that story about a big earthquake coming, so every night I’m there I sleep in a helmet and life jacket. I wrote a whole middle grade series with Ally Condie called The Darkdeep just so we could hang out together and watch old The Amazing Race seasons, a show we will one day win. I like sandwiches. That’s basically my brand at this point. People die in my books a lot. I have two pit-bull mix rescue dogs and they are the absolute best. I used to be a lawyer but nope, awful. Go Lake Monsters. 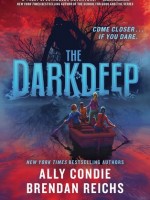 by Ally Condie and Brendan Reichs

When a bullying incident sends twelve year-old Nico Holland over the edge of a cliff into the icy waters of Still Cove, where no one ever goes, friends Tyler and Ella—and even “cool kid” Opal—rush to his res-cue . . . only to discover an island hidden in the swirling mists below. Told from Nico's and Opal's alter-nating points of view, this is perfect for fans of Stranger Things. (Grades 6—8)

As the Anvil, an enormous asteroid, threatens to end all life on Earth, sixteen-year-old Min begins to
uncover a lifetime of lies, a sinister conspiracy involving all students in her sophomore class in Fire Lake,
Idaho. (gr 7+)

Tory Brennan (niece of Temperance Brennan from BONES TV series) and her friends are exposed to a
canine parvovirus when they rescue a dog from a medical testing facility and soon realize they have
heightened senses, which they use to solve a cold case murder. (gr 7+)