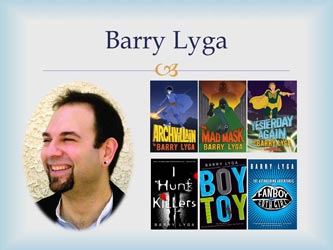 I own a bunch of yoyos, but I’m really terrible at yoyoing. I told someone this once and she bought me a book on how to do yoyo tricks. But I’m still terrible at it. I was the guy who made Free Comic Book Day happen. If you love Free Comic Book Day, you’re welcome. If you don’t even know what Free Comic Book Day is, then I guess I didn’t do my job very well!. I wrote a terrible, terrible novel when I was in high school. There is one copy of it in existence. I keep thinking I should burn it, but I can’t bring myself to. Someday, someone will black-mail me with it. They asked me for “fun, silly, embarrassing or humorous facts” for this bio, but the sad truth is, I don’t have many fun, silly, or humorous facts. And the embarrassing ones? You think I’m gonna tell YOU?

Barry Lyga is on the web at barrylyga.com

Writing and Living. This will be a combination session in which I give advice to those who want to write, but rather than just discussing the nuts and bolts of writing, I will also talk about ways to prepare yourself to live a “writing life.”

We will do some fun exercises to limber up creativity. I will also answer questions about writing comic books.

Twelve year old Kyle Camden develops greateer mental agility and superpowers during a plasma storm that also brings Mighty Mike, an alien, to the town of Bouring, but while each does what he thinks is best, Kyle is labeled a villain and Mike a hero.

I Hunt Killers by Barry Lyga

Jazz learned all about being a serial killer from his father, but believes he has a conscience that will help fight his own urges and right some of his father’s wrongs, so he helps the police apprehend the town’s newest murderer.

After solving a deadly case in the small town of Lobo’s Nod, 17-year-old Jazz, the son of history’s most infamous serial murderer, travels to New York City to help the police track down the Hat-Dog Killer.

After five years of fighting his way past flickers of memory about the teacher who molested him and the incident that brought the crime to light, eighteen-year-old Josh gets help in coping with his molester’s release from prison when he finally tells his best friends the whole truth.

Kevin is uncomfortable with the publicity surrounding his act of accidental heroism, but when a reporter photographs him apparently being unpatriotic, he steps up to encourage people to think about what the symbols of freedom really mean.

A fifteen-year-old “geek” who keeps a list of the high school jocks and others who torment him, and pours his energy into creating a great graphic novel, encounters Kyra, Goth Girl, who helps change his outlook on almost everything, including himself.