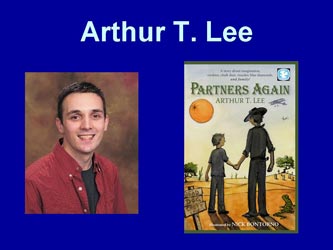 Arthur T. Lee started writing creatively when he was six years old. When his first book, a 1-page story entitled The Rainbow Goes to Japan, was chosen to go to the local Young Author’s Conference, writing became much more than an assignment. Says he, “It was clear to me then—while on the swings at recess, I believe–that writing was what I wanted…yearned…had to do.” Partners Again is his first novel. With several more Middle Grade and Young Adult novels in the works, Arthur currently resides with his wife and three boys in Washington State, where, he says, “I have the privilege of telling my boys a bedtime story each and every night.”

2009 Cavalcade Workshop: How do we come up with stories?

Where do ideas come from? Everywhere! Exploration of the 5 senses and how they help literature become alive. Education + Imagination = Salt. Imagination vs. Education/Research—Circle of Life. Arthur’s Big Book of Ideas.

When Albert McTweed’s parents begin having problems at home, he is forced to deal with ideas and emotions well beyond his years. He develops a deep disdain for all things elementary. Losing himself in the Old West of his imagination brings comfort. But soon the frustrations at home taint the sanctuary of his pretend world, and the dangers from his pretend world threaten the real one.

A family adventure, Partners Again follows the struggles and triumphs of the McTweed family and their 12-year old son, Albert, who will stop at nothing—in or out of his imagination—to put his broken family back together again! But when the McTweed’s family problems draw in the likes of a ravenous 6th grade teacher, known as The Hungry Hippo in professional wrestling circuits; a Colonel Principal rumored to have murderous tendencies; a dog-ugly gunslinger with puffy sideburns; and the infamous mob boss called Al Godón, Albert must scramble to find the real source of his imagination’s power before it’s too late.

In Partners, three worlds collide: the real world, the imaginary world, and the real world exaggerated by Albert’s imagination. Determining which one is which is only half the adventure!