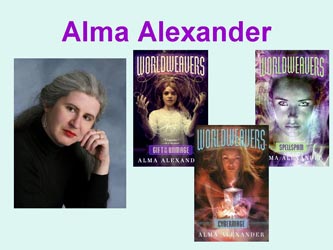 Alma A. Hromic (who now writes as Alma Alexander) was born in 1963 in Novi Sad, Yugoslavia, on the shores of the river Danube. Her father’s employment with international aid agencies meant that the family spent twenty years living in various countries in Africa, including Zambia, Swaziland, and South Africa. She was educated in England and South Africa and spent time in New Zealand before moving to the United States. Alexander is a fantasy writer whose novels include the Worldweavers young adult series, The Secrets of Jin-Shei, The Hidden Queen, and Changer of Days. She currently lives in Bellingham, Washington with her husband, R. A. Deckert.

2009 Cavalcade workshop:  My Hero or My Darling Villian

A story is traditionally defined as a character with a problem. Is your character’s problem that he or she has a nasty evil villain to overcome… or is it the “villain” that has the problem with the pesky do-gooding hero? How do you create a character who lives?

Thus says Cheveyo: mage, teacher, the first person in Thea’s life to remain unimpressed by her lineage as Double Seventh, the seventh child of two seventh children. From birth, great things were expected of Thea, gradually replaced by puzzled disappointment as it became evident her magical abilities are, at most, minimal. Now, with Cheveyo, Thea has begun to weave herself a new magical identity, infused with elements of the original worlds where Cheveyo and others like him walk. But back home, she attends the Academy, the one school on earth for those who, like her, can’t do magic. It is at the Academy that Thea realizes she will indeed have to fight, since her enemies are hungrier and more dangerous than she thought. What’s more, her greatest strength may be the very powerlessness she has resisted for so long.