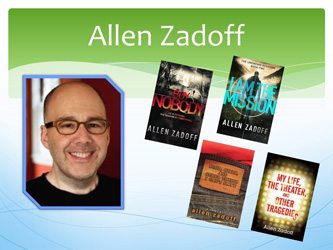 I grew up in a nice, clean, incredibly boring suburb in upstate New York. I couldn’t wait to get out and go where the action was. I moved to New York City after graduate school because it was the most exciting place I’d ever been, and people were loud and intense and in your face there. Maybe I write about a sixteen-year-old secret agent for the Government because it’s the complete opposite of who I was and who I am. People ask me if I studied martial arts and espionage to write The Unknown Assassin Series, and I say, “No, I just fantasized a lot as a kid.” That’s the great things about being a writer. You can live the life you live and the life of your dreams at the same time.

2015 Workshop: Blow It Up! How to Write a Great Action Scene (That Also Tells a Story)

We’ll read and discuss some exciting action scenes, then workshop participants will plan and write their own action scene (fight, chase, etc.) with a focus on character development and storytelling.

Food, Girls, and Other Things I Can’t Have by Allen Zadoff (grades 8-10)

FOOD, GIRLS, AND OTHER THINGS I CAN’T HAVE is the story of a boy who doesn’t fit–in his pants, in his family, in his school, or in his life. If Andrew Zansky can only be thin enough, smart enough, or popular enough, he thinks everything in his life will be perfect. His father will come back home. The pretty girl in school will fall in love with him. His Mom will be happy again.

Boy Nobody is the perennial new kid in school, the one few notice and nobody thinks much about. He shows up in a new high school in a new town under a new name, makes a few friends, and doesn’t stay long. Just long enough for someone in his new friend’s family to die-of “natural causes.” Mission accomplished, Boy Nobody disappears, moving on to the next target.

My Life, the Theater, and Other Tragedies by Allen Zadoff (grades 7‐12)

While working backstage on a high school production of “A Midsummer Night’s Dream,” sixteen-year-old Adam develops feelings for a beautiful actress–which violates an unwritten code–and begins to overcome the grief that has controlled him since his father’s death nearly two years earlier.

Since You Left Me by Allen Zadoff (grades 7-12)

Sanskrit Aaron Zuckerman feels like everyone important in his life has left or is in the process of leaving him–his dad after the divorce, his second grade crush and love of his life, his best friend when he found God, and his mom when she might run off with her yoga instructor. Sanskrit decides to tell a lie in order to trick people into staying around him, but he cannot hide the truth forever.