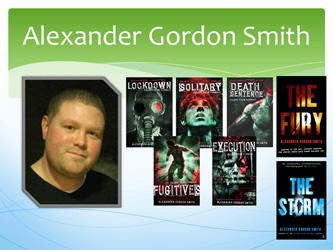 Alexander Gordon Smith has always wanted to be a horror writer, ever since his gran made him watch Texas Chainsaw Massacre when he was six. The first time he tried to be an actual horror writer (aged 11) he attempted to research a haunted house and lasted seven minutes inside before running away screaming and puking all over himself. Now he is scared of everything (and yes, we mean everything), but that’s okay because he knows that writing about things you are afraid of can make for some truly frightening tales. He is the author of the internationally bestselling series, Escape From Furnace, and The Fury, and also writes movies and video games. He lives in England, and spends most of his time hiding in his bedroom.

Join me for a fast-paced and inspiring session about what it takes to be a horror writer! We’ll be taking some of our worst fears (mine is slugs, for the record) and using them to create stories guaranteed to give your readers nightmares. Designed to show how easy it is to be inspired, this session is perfect for new and experienced writers
alike. (Warning: contains exploding cow pies, but thankfully not real ones.) 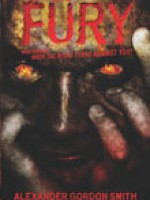 Imagine if one day, without warning, the entire human race turns against you, if every person you know, every person you meet becomes a bloodthirsty, mindless savage...That's the horrifying reality for Cal, Brick, and Daisy. Friends, family, even moms and dads, are out to get them. Their world has the Fury. It will not rest until they are dead. (Gr 7-10) 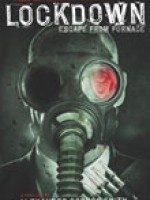 When fourteen-year-old Alex is framed for murder, he becomes an inmate in the Furnace Penitentiary, where brutal inmates and sadistic guards reign, boys who disappear in the middle of the night sometimes return weirdly altered, and escape might just be possible. (grades 7-10)