Alex London is the author of over 25 books for children, teens, and adults, with over 2 million copies sold. For middle grade readers, he’s the author of the Dog Tags, Tides of War, Wild Ones, and Accidental Adventures series, as well as two titles in the 39 Cluesseries. For young adults, he’s the author of the cyberpunk duology Proxy and the epic fantasy Black Wings Beating. He’s been a journalist reporting from conflict zones and refugee camps, a young adult librarian with New York Public Library, an assistant to a Hollywood film agent, and a snorkel salesman. He lives with his family in Philadelphia, PA.

The people of Uztar have long looked to the sky with hope and wonder. Nothing in their world is more revered than the birds of prey and no one more honored than the falconers who call them to their fists. Brysen strives to be a great falconer—while his twin sister, Kylee, rejects her ancient gifts for the sport and wishes to be free of falconry. She’s nearly made it out, too, but a war is rolling toward their home in the Six Villages, and no bird or falconer will be safe. Together the twins must journey into the treacherous mountains to trap the Ghost Eagle, the greatest of the Uztari birds and a solitary killer. Brysen goes for the boy he loves and the glory he's long craved, and Kylee to atone for her past and to protect her brother's future. But both are hunted by those who seek one thing: power. (grades 9+)

Cory McNab wanted to be a Navy SEAL, but he washed out of the program. Now he is a member of the Navy's Marine Mammals Program, where he is partnered with a search-and-recovery dolphin named Kaj. Together, Cory and Kaj are the Navy's best hope when a US spy submarine is lost in enemy waters. With the help of Kaj's bio-sonar, they should be able to locate the submarine before its secrets fall into the wrong hands. But the mission gets complicated when a team of Navy SEALs runs into trouble. Can Cory succeed where his heroes have failed . . . or is he in too deep? (grades 5-8) 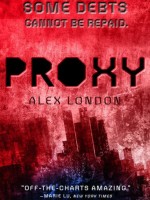 Syd’s life is not his own. As a proxy he must to pay for someone else's crimes. When his patron Knox crashes a car and kills someone, Syd is branded and sentenced to death. The boys realize the only way to beat the system is to save each other so they flee. The ensuing crosscountry chase will uncover a secret society of rebels, test the boys' resolve, and shine a blinding light onto a world of those who owe and those who pay. (grades 8+)

When Gus Dempsey joins the US Marine Corps, he knows without a doubt that he will make a great dog handler. He's always been good with dogs. In fact, he's often better with dogs than he is with people. But Loki is not the dog that Gus was expecting. Fun-loving and playful, Loki acts more like a pet than the well-trained, bomb-sniffing Marine that he's supposed to be. When Gus and Loki deploy to Afghanistan, though, they have no choice but to learn to work together. Because in war, getting along is a matter of life and death. (grades 5-8)

The Adventures of Wrong Man and Power Girl

When trouble is brewing, Wrong Man is there to make it worse. When someone needs help, Wrong Man does just the opposite of what's needed. And when situations go awry, Wrong Man helps them go awry-er. Luckily, Wrong Man's daughter is there to really save the day. In this comic-book inspired picture book, our hero accidentally melts stinky cheese all over the city, lets sharks loose, and turns one big meteor into many little ones! But all Wrong Man wants to do is help -- and try to help he does, until he finally gets it right. He may be laden with mishaps, but Wrong Man is also full of heart. (grades K-3)

Kit is a young raccoon who has lived his whole life under the Big Sky. But when a pack of hunting dogs destroy his home and kill his parents, Kit needs to escape. He finds himself in Ankle Snap Alley, a city in the midst of a turf war between the Wild Ones and the people's pets who call themselves The Flealess. There he uncovers the secret that they died for— an ancient truce that gives Ankle Snap Alley to the Wild Ones. But the Flealess will stop at nothing to keep that secret buried forever, and Kit is in serious danger. Only the brave of heart and quick of paw can save the Wild Ones now. (grades 3-6)

We Are Not Eaten by Yaks (An Accidental Adventure #1)

Eleven-year-old twins Oliver and Celia Navel could care less about adventure and they really do not like excitement. They’d rather be watching television. Unfortunately for them, their thrill seeking parents have dragged them from continent to continent their entire lives. But when their mother goes missing and their father makes a bet with the devious explorer Sir Edmund, the twins are forced into action. They head to Tibet where they fall out of airplanes, battle Yetis, poison witches, and encounter one very large yak. If they can unravel the mysteries and outwit Sir Edmund, they might just make the discovery of a lifetime...and get cable television! (grades 5-8)