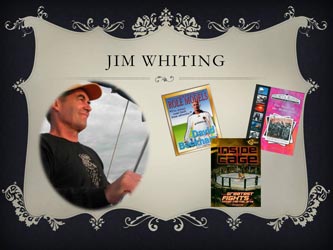 When Jim Whiting’s seventh grade PE class ran a 100-yard dash, Jim finished dead last among more than 60 boys. A few years later, Jim discovered that he had some talent for running. So if he ever wins the lottery he plans to track down everyone and re-run the race. Jim and his sailboat almost got sunk by a gray whale. Being fired in 2000 from a job writing product descriptions for an online sporting goods company was one of the best things that ever happened to Jim. Jim’s first published short story was based on running in the original Olympic stadium in Olympia, Greece and nearly being arrested.

How to write better biography reports by beginning
with something besides your subject’s birthdate. Several examples illustrate how starting with something interesting/controversial/gross about your subject hook readers into wanting to know more about him or her.

As an eight-year-old in a gang-ridden community, Troy Polamalu seemed destined for a life of crime. His life turned around, however, when he moved to rural Oregon to live with his uncle. He became a top athlete and eventually earned a football scholarship to the University of Southern California. Drafted in 2003 by the Pittsburgh Steelers, Troy became one of the top-rated defensive players in the National Football League in just two years.

Inside the Cage: The Greatest Fights of Mixed Martial Arts by Jim Whiting
grades 6-9

A full-contact, unarmed combat sport, Mixed Martial Arts pits competitors from different martial arts backgrounds against one another. These books cover the gamut of this incredibly popular sport, from its history to its greatest fights. A must-have for any fighting enthusiast!

The Story of the Holocaust by Jim Whiting
grades 5-8

Instead of beginning with the events leading up to the Holocaust, the first chapter unveils the results of Hitler’s Final Solution through the eyes of an American soldier liberating a concentration camp at Dachau. A graphic photograph of emaciated corpses accompanies the text, which includes references to a “shooting gallery” with children as targets, and a dead mother with a baby at her breast. Following this disturbing chapter, the author turns to the “reasons” the Holocaust occurred, establishing the long history of anti-Semitism in Europe and discussing the factors that led to Hitler’s rise to power. The rest of the book includes the growth of the Nazi party and the outbreak of World War II, the rounding up of the Jews and the establishment of the concentration camps, and the Nuremberg trials.

Soccer is Probably the World’s Most popular spectator sport. Yet Major League Soccer has never been more than a minor sport in the United States, even though millions of youngsters enjoy the game on playgrounds and in organized leagues. To change that situation the Los Angeles Galaxy signed superstar David Beckham to a five-year, $250 million contract in 2007. The league hopes that his celebrity status will help make soccer more appealing in the United States. So far, they are getting their wish.