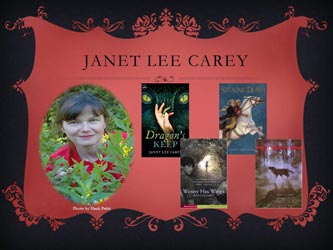 Janet Lee Carey says she has been writing “ever since I could hold a pencil between my stubby little fingers. But the longer answer is I began writing poetry in grade 8. That’s when I fell in love with the music of the language. Poetry and journal writing eventually led to novel writing in my late twenties. Since that time, I’ve never turned back. And no I’m not going to tell you how many years it’s been since my late twenties. I’ll let you figure that out. Of course my first two novels were “learn as you go” novels and they’ve never seen the light of day thank goodness.”

One Creepy Fact: I’m terrified of spiders. I used to scream when I saw them and make my brothers suck them up in the vacuum cleaner. After awhile I began to fear the vacuum cleaner. I mean what if they were all still alive in there plotting revenge? I’m much more grown-up about spiders now. I don’t scream when I see them anymore, I just groan and run away. Someone once said “They’re more afraid of you than you are of them.” Um, yeah right!

Ms. Carey set the goal of becoming a published author at age ten. Workshop gives an entertaining look at the ups and downs of her writing journey from rejection to publication, awards, and movie deals. Highs and lows are a part of achieving any life goal. Ms. Carey will give students tools to begin the step-by-step journey to their dreams.

Late one night, piercing screams awake the villages of Noor.  And the next day the bones of a young woman are found deep in the surrounding forests. Terror courses through the hearts of the villagers, along with something else…relief. An attack such as this is not uncommon in Noor.

The Shriker, a massive beast of unimaginable strength and rage, has roamed the dark woods for nearly three hundred years, savaging those unfortunate enough to encounter him. The people of Noor have lived in fear for so long that most have forgotten that the Shriker was once a loyal dog until the day his master betrayed and cursed him, condemning him to life as a monster. But Miles and Hanna Ferrell have never forgotten where the Shriker came from — how could they? It was, after all, their ancestor who betrayed the dog.

After eloping with an outlaw, King Arthur’s sister, Evaine, is banished to Wilde Island. Merlin, however, foresees a prophecy regarding the 21st queen in her future lineage: “She shall redeem the name Pendragon. End war with the wave of her hand. And restore the glory of Wilde Island.” Centuries later, Queen Gweneth (the infertile queen number 20) devours an egg stolen from the dragon, Lord Faul, in an attempt to conceive. When she does give birth, her daughter, Rosalind, is born with the “devil’s mark”: her left hand bears a claw in place of one finger. Rosalind hides her hands underneath golden gloves and Queen Gweneth repeatedly commits murder to preserve the secret. The lonely princess doubts any man will ever marry her, but when she meets Kye-a young knight who vanquished a female dragon that has plagued Wilde Island-she falls in love. Soon after, Rosalind is captured by Lord Faul (her true father) and becomes nursemaid to his offspring, known as pips. When one of the pips drowns, Lord Faul’s tears quench his “inner fire,” killing him and ending Rosalind’s capture. She returns to Wilde Island to claim her rightful place as queen, and though she is put on trial for being a witch, Rosalind’s “curse” ultimately becomes her triumph. Fantasy lovers will readily empathize with this brave heroine who learns to be true to herself.

“I want that soul sack,” he said suddenly. “What?” the witch asked around the scrap of meat she was chewing.“I want it so no one I love will ever, ever, ever have to go inside again.” “It’s not for mortal hands to have.” The witch spat out a bit of bone. “You know magic. Give me the power to steal the sack.” When fire steals his family from him, Kipp is left with only his little sister to protect as best he can, and he’s determined that death will not come to her–or to the girl he loves but can never approach. But who would dare to master death? As Kipp finds out, it’s complicated, and possession of the soul sack is no guarantee of success. Dragon’s Keep author Janet Lee Carey has crafted a stirring and original fantasy set in a harsh and beautiful desert landscape, in which a young man who has lost everything finds the strength within himself to care for those he loves–and to allow those he cannot keep close to him to take a path he cannot follow.

In the fight with the truck barreling toward them, Wenny and Will lost big. Wenny lost her life. Will lost a sister — and lost faith in himself. But then Will starts writing letters to Wenny. He tells her all about the secret of his near-death experience, and the troubles he’s having at home. Some letters are funny. Some letters are harsh. And when read together, they tell the story of a boy who finds a way to move past death and learns how to live again…

An interview with Janet Lee Carey on Seattlewrote blog