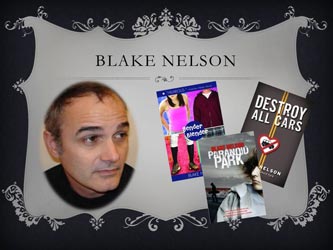 Blake Nelson was a great builder of forts as a boy. He preferred backyard tree forts but was not above building the occasional underground fort, (digging a hole and putting a board over it), the back of the garage fort (under dad’s workbench), or the old classic: the kitchen table with a sheet over it fort. All forts are good for the soul, reasoned Young Blake, as they provided solitude, privacy, and a place from which to shoot rubber bands at siblings, pets and parents without detection.

2012 Cavalcade workshop: Writing from the Opposite Sex

Are you a boy who doesn’t understand girls. Are you a girl, who can’t imagine being a boy? One of the most rewarding acts of  the imagination is putting yourself in the skin of a person totally unlike yourself. In my workshop I would ask kids to try writing from the perspective of the opposite sex. And also, if they like, to try writing from the perspective of someone from a different time or place. How do you unattach yourself from your own experience and let your imagination let you inhabit the life of someone who has a totally different perspective than you?

A psychological thriller tracing the chilling consequences of an impulsive act of violence. The adventure-turned-nightmare begins at Paranoid Park, an “underground” skateboard park in Portland, Ore., with a “dangerous, sketchy vibe.” Finding himself with nothing to do on a Saturday night, the unnamed narrator, a high-school junior, enters the park looking for excitement and ends up involved in a scuffle between Scratch, a “borderline gutter punk,” and a security guard. The guard is killed. There are no witnesses except the two surviving boys, and the narrator must decide what to do after Scratch flees the scene of the accident. Written in the form of a confessional letter, the book details the narrator’s moral dilemma after the incident. Tormented by nightmares, questioned by the police and toying with the notion of telling the truth to his father or the authorities, the narrator remains paralyzed, trapped by his feelings of guilt and paranoia. While effectively conveying the intensity of his protagonist’s emotions, the author refrains from passing judgment. It is left up to readers to decide if the narrator is a criminal or a victim, and how he will be affected by his final decision.

Emma:  Wants Jeff Matthews to notice her. Hates sexist boys. Wonders when she’ll get her period. Tom: Must avoid looking like a wuss. Must deal with his blended family. Must get a chance with Kelly A.Then something freaky happens:  Emma and Tom switch bodies. And until they can find a remedy: Emma: Can’t believe she has a . . . thingi. Hates mean girls. Finds out secondhand that her period has arrived.  Tom: Must learn to put on a bra. Must deal with an overachieving family. Must not be alone with Jeff Matthews.

James Hoff likes to rant against America’s consumerist culture. He also likes to rant against his ex-girlfriend, Sadie, who he feels isn’t doing enough to change the world. But just like he can’t avoid buying things, he also can’t avoid Sadie for long. This is a fantastic, funny, sexy, cool masterpiece from one of the best YA writers at work today, an anti-consumerist love story that’s all about idealism, in both James’s relationship with the world and his relationships with the people around him.

Madeline is sent away to Spring Meadows to help with a drinking and rage problem she has. It’s a pretty intense place, but there is the weekly movie night in town–where Madeline meets Stewart, who’s at another rehab place nearby. They fall for each other during a really crazy time in their lives. Madeline gets out and tries to get back on her feet, waiting for Stewart to join her. When he does, though, it’s not the ideal recovery world Madeline dreamed of. Both of them still have serious problems. And Stewart’s are only getting worse…